I spent most of the day yesterday working in a first-ring suburb of Trenton, helping to renovate the future home of the Isles headquarters. Isles is a non-profit organization currently based out of Trenton which seeks to foster self-reliance among residents of the city. They offer, among other things, financial literacy classes, community gardening projects, an alternative high school for youth, and a series of renovation projects to turn abandoned properties into habitable residences. They do a lot of good work in this state’s capital, a city that has lots of problems (just like every other city): gangs, drugs, crime, etc.

My company sponsored the day yesterday – several times a year we organize a service project. In the past we’ve sorted and inventoried clothes for a homeless organization, shopped for and wrapped Christmas presents for homeless families, created a community garden with Isles, and assisted with the upkeep of a local land trust. Yesterday was our first building rehabilitation project.

This is something I used to do fairly regularly for most of high school – every Saturday morning, one of the nuns would pile eight or ten students into a van and drive us into Camden. We’d spend anywhere from four to six hours updating an old, run-down row home – knocking down old walls, removing plaster, putting up new walls, wiring, plumbing, gardening, painting. Whatever needed to be done, we’d do it, with the guidance of an experienced contractor. At the end of the project (usually in the spring or summer, after a year’s worth of work), we would help a family move in and attend a house blessing. It is still one of my favorite memories of high school.

The building we were working in yesterday is this one: 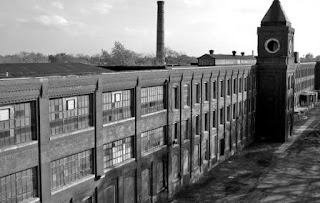 It’s situated on 6 acres of land, and was built in three installations over several decades. Originally, it was used as a textile mill, and there were a few places that still showed evidence – scrawled on the walls, I saw notes that said, “Red – Non Woven,” “White, Non-Woven.” When finished, the building will contain offices, school facilities, and a residential area. It’s an ambitious project, but the final product will be beautiful.

I spent the three hours working with Erin from Finance, applying a chemical paint stripper to wooden columns. There were two other teams of two working on the same project, and we were supervised by Jimmy and Dante, two of the most patient men I have met in my life. Both are graduates of the YouthBuild Initiative, which helps young people transition from the juvenile justice system to the working world by providing them with practical and valuable skills (such as construction), and they showed us how to carefully and safely apply the stripper to the wood, then cover it with a special paper that would be peeled off 24 hours later (the paint comes with it). It wasn’t particularly difficult or complicated work, but it was grounding and humbling.

It made me want to get back to doing that kind of work regularly again. I miss doing work that has a purpose.