Yesterday I borrowed Danika‘s car and headed west to San Francisco. I spent the day with Jon, a friend from another lifetime, who showed me around the city. We started at Twin Peaks, looking out over the city, the bay, the ocean and everything surrounding. From there we hit Haight-Ashbury, where we had lunch at my favorite restaurant ever (well, not ever, but I like hyperbole so yes, ever), Asqew (where everything comes on skewers): 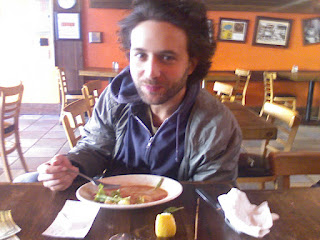 We then made our way around the city, visiting the Castro, the Presidio and Baker Beach. The hills and winding roads made me forget for awhile how difficult things can feel – I felt lighter yesterday than I have in a long time. There really is something magical about San Francisco.

The last time I was in SF, I had a sort of revelation: I’m ok. I was walking down the street with Jacob and my brother and his wife, and these street kids who were hanging out on the sidewalk reached out to high-five with Jacob. They were laughing and joking around with him (he was only three at the time), and somehow it just hit me all at once that everything was ok – I’m ok, I will always be ok, everything is going to be fine. That same feeling came over me again yesterday at Twin Peaks, looking at this huge quilt of the city, watching the landscape’s subtle movement. I felt it again, sitting on a rock on a trail overlooking the ocean – everything is so gigantic, the ocean, the sky, everything. And I’m ok. It’s nice – I feel like the city has done me a huge favor, somehow. Which is good, because this state keeps stealing people from me.

Spending time with Jon was strange – foreign, but vaguely familiar at once. It had been at least 10 years since we’d last talked, and though there are obvious differences now – he’s older, and his face shows it appropriately – so many things are the same: the same voice, the same measured pace of speech. Things I thought I’d forgotten felt familiar yesterday, too. It’s hard to classify – but it was a good feeling, walking around the city he calls home now, sharing the magic with someone else. He bought a plant – a variegated ivy in a pot, with long tendrils reaching down.

I think I said a lot of things out loud yesterday that I’ve been thinking for awhile, but unwilling to say. It’s funny to say them to someone who is familiar and stranger at once. He has a way of just observing, too, without sharing much – so I have no idea what he was really thinking yesterday, though he smiled a lot, so I guess it can’t be all bad.

Coffee has never tasted so good.