A: Miss Piggy makes an appearance for Breakfast, and everyone has a hangover on Saturday.

Ryan showed up on my doorstep at 7:30 on Friday night, after a 2-hour-and-then-some drive from Maryland. He looks pretty much exactly like any picture you may have ever seen of him: 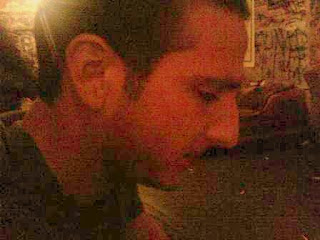 Putting pictures in person, though, is always a little disconcerting – Ryan has the deceptive appearance of a good-looking fratboy, with his worn jeans and a trendily faded-just-right tee shirt. I say deceptive, of course, because he’s just really a big nerd underneath. Which is refreshing. I like nerds (but not fratboys).

He accompanied Donna and me into Philadelphia, where we stopped to pick up K, who was busy pre-gaming at her apartment by consuming a cocktail of vodka and ginger ale (yech). After parking in a 2-hour “free” lot, we meandered up South to the ultra-hip pseudo-punk bar Tattooed Mom’s, and commenced a four-and-a-half hour set of drinking.

There was a time when I did a lot of drinking on my own, which was not good. Lately (as in the last year or so), I’ve cut the alcoholic consumption waaaay back. But seeing as Jacob was with his father for the weekend and I really had no responsibilities or obligations (and a designated driver was ready and willing), I made up for some lost time. Every other beer or so, I stopped to sample Ryan‘s Jack and Coke, each time making the “I’m about to be sick” face. When the Jack and Coke started tasting good, I knew it was time to stop drinking.

Ryan is pretty amusing. I knew this already, as he regularly makes me laugh out loud when I’m illegally messaging from my office at work – this has become somewhat hard to explain to nosy office-neighbors who want to know why I’m always laughing. But in person, when there are facial expressions, gestures and a voice to go with the jokes, well – it was a good night.

Around the two-hour mark, Donna and I departed for about 20 minutes to move the car from the free lot to another free lot. We beat the two-hour time limit by ten minutes, but found a ticket on the car anyway. It threatened to break Donna‘s mood for the evening, but she held it together and we traipsed back through the rain to find K and Ryan engrossed in a very loud conversation about – well, I don’t know what. It’s occasionally hard to follow K when she’s drunk and laughing so hard.

We closed down the bar at 2 a.m. Over greasy eggs and home fries at the diner the next day, we traded stories about working for nursing homes (me in the kitchen, Ryan in activities).

It turns out the parking ticket had someone else’s license plate number on it.