I received my copies of my chapbook this weekend from Finishing Line Press – and judging from the number of emails and texts I got, plenty of other people received their copies, as well. The book is lovely: the cover is a light blue cardstock that has a bit of sparkle to it, and just inside the cover is a sheet of rice paper, which is a nice detail. There is also a ribbon tied to the spine – used as a bookmark, this is just another fine touch the press adds to really convey the sense that these books are handcrafted. 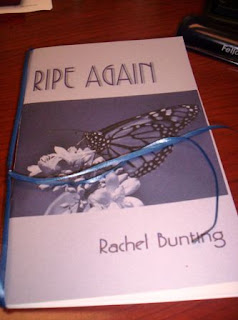 The cover photograph is by Michael Cramer, a photoblogger I “met” awhile ago over at JournalSpace; he did me the great favor of sending several photographs for me to choose from. I picked my three favorites and sent them off to FLP, who chose this one for the cover.

The inside of the book is well done, as well – the setting is simple, no typos, and clear. The press adhered to my layout and corrections in the galley stage, and Kevin and Leah (the folks who run the press) were an absolute dream to work with. Overall, I’m really, really pleased. 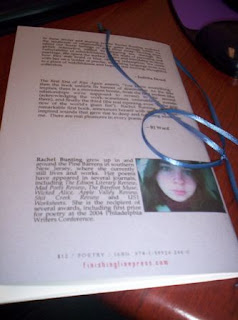 Hooray!
If you want to purchase a copy, I’m now on Amazon!