I subscribed to the Academy of American Poets’ “Poem-a-Day” e-newsletter, which, as the name suggests, delivers a new poem each day to my inbox during National Poetry Month. I figured it was a good way to keep me reading poetry when I’m distracted by pretty much everything else, including work, school, and real life. So far the poems have been pretty good, and they’ve mostly been names I don’t know well. I’ve picked up a few lines here and there that I really love – like this from Valzhyna Mort’s “Belarusian I”:

“we discovered we ourselves were the language”

which I think is an incredibly beautiful line, full of self-discovery and imagination.

I also have found a few poems that are just lovely, like the short and surprising “Learning to Speak,” by Liz Rosenberg, and the strangely specific “Alpha Zulu” by Gary Lilley, which has one of the strongest set of closing lines I’ve read in awhile.

April 18th’s poem was from “Ferrum,” by M. NourbeSe Philip. The entire text of the email (which, on previous days, included the actual poems) read as follows:

In order to remain faithful to the adventurous formatting of today’s poem, we have it posted here.

I clicked on the word “here” and linked over to the actual poem. The poem is a deconstructed play on linear, narrative and stanzaic poetry, with its letters splayed all over the page. Words are broken up into parts and across lines, and I found it resembled a Sunday newspaper cryptic more than a poem. In order to get through the first few lines, which look like this: 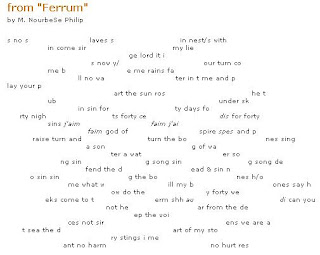 I had to do a little reconstructing in my head to sort out what letters belong together to make what words. After about five minutes of trying to do it in my head, I realized: this poem is taking more effort than it should. I am by no means a believer that poetry should be easy. “One, two, buckle my shoe” is incredibly easy, not terribly profound, and not exactly up my alley. But I am also not of the opinion that a poem should require a decoding ring. That’s sort of how I felt while trying to get through this poem, a feat which took me the better part of a half hour.

I was, quite seriously, very confused about what the poet was trying to do: make a commentary on language? On context? On how symbols taken out of context can be interpreted or misinterpreted? I had a lot of questions. So I did what any good student of poetry would do: I googled.

It turns out that none of my initial assumptions were right, and that Philip had a much more meaningful intent in mind – she includes this poem in a larger manuscript which details an event in 1781: the captain of the slave ship Zong murdered 150 Africans. The purpose of the murder? The slaves were insured as cargo, and this particular captain wanted to collect on the insurance policy. Surely this is rich territory for poetry, and Philip sets out on an ambitious path, trying to retell the story and reveal something new. Philip limits herself, however, to relying entirely on the text of the legal decision in the case of the ship’s owner vs. the insurers of the cargo. The text of that decision is about 500 words (which is, in fact, less than what I have written on this so far). Philip has this to say about it:

The text of the legal decision of the Zong case, Gregson v. Gilbert, runs to some five hundred words. Relying entirely on the words of the reported text, but through a variety of techniques such as whiting and/or blacking out words, fragmentation and reversals, I use this word store to create the manuscript, Zong! Fragmenting and mutilating the text mirror the fragmentation and mutilation that slavery perpetrated on Africans and African customs and life. In deliberately changing the story of the legal text, I engage in a similar duplicity that the actors in the Zong case engaged in to convince themselves that it was perfectly allowable to murder Africans in order to collect insurance monies. Further, in dropping below the objective legal text as given, to search out the emotions: “negroes want sustenance…negroes want water,”3 I subvert the rationality–the murderous rationality, if you will–on which the law is based.

I think perhaps Philip overestimates her ability to transform the text. I think her intent to symbolize the experience of the African people gets lost in the act of actually creating the symbolism – I’ve lost the meaning because of the technique, I suppose. My frustration in trying to get through just one poem swamped my desire to experience the art at work here. I want to be overwhelmed by the poem, not the effort it takes to get through it.

So at what point does the technique used to create a poem supersede the poem itself? At what point does the poet lose sight of the original intent, and becomes unable to find it again? Or am I just projecting my own confusion here? As an ambitious project, I very much want to see Philip succeed in bringing to light the many truths of this horrible instance of humanity (and its lack). I just don’t think she’s done it.

Of course, that’s just me. I’d be interested to see how other people are reading this, and how it works for them.