I downloaded and installed iTunes on my computer at work a little over a month ago, mostly because I got myself that new flashy little iPod. Since downloading it, I’ve decided it’s amazing, and incredibly dangerous. Music on demand is a wonderful idea – but the dangerous part is where they store your credit card information, so you don’t remember how many songs you bought until you get the bill. Ugh.

In the past two weeks or so I have downloaded 34 songs, which may not seem like a lot – but I generally don’t get this much new music so quickly. It’s a fabulous thing, because I’ve only bought the songs I like instead of purchasing a whole album. I just thought I’d share some of my purchases with you: 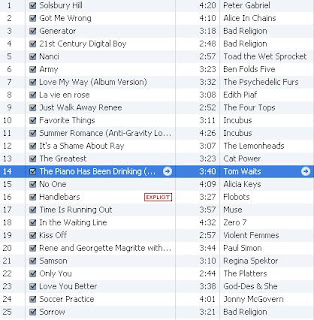 So give me your suggestions – what should I get next?