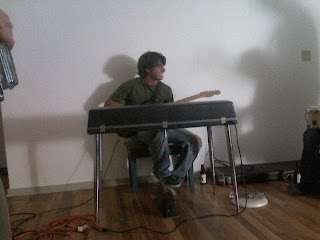 Spending several days in a row with my brother – most often preceded, and then followed by, long droughts without him – is always a little surreal. It’s strange, after months of not seeing him or hearing his voice, to remember how much and how little I can know about another person at the same time. And it’s also a little like looking in a mirror – so many of the gestures, the expressions are like mine. Of course, that only makes sense: familial resemblance.

One of the things I never remember is how musical he is. It still seems unlikely to me – I remember his admiration in high school for those friends who strapped on guitars and played for hours. I remember how he never said it, but it was so clear: he wanted to play, too. And now he does. He quickly learned guitar, and has since discovered how it translates fairly easily to other instruments. Though he is by no means an expert, he has a passing knowledge of how to play the drums, the piano, and probably some other instruments as well.

And now he’s managed to surround himself with a group of friends who are musical, as well. Many of them seem to be quite a bit more serious about it than he is: they are musicians, artists, while he is “a guy in a band.” This is not to disparage either my brother or his friends – in fact, I think they all have a healthy idea of how good they are, and how far they can go. My brother plays guitar with a slight sneer, laughing at himself when he makes a mistake or loses the rhythm. He has a good time with music, but doesn’t seem to take it – or himself – too seriously. His friends, on the other hand, treat music the way I treat poetry: yes it’s fun, but it’s also what drives me. It’s one of the things I need to do, like eating or breathing or loving my son.

The few days I spent in Sacramento were filled with music. Ron and his roommate Dave (owner of most of the instruments in the house) have a sort of revolving door: people sort of showed up, picked up an instrument, and an impromptu jam session would take place. Someone was playing something at pretty much all times – the only truly quiet period was during the day on Friday, when I was alone in the house with the dogs. And now that I’m back home, I’m realizing how much I miss being surrounded by music.

I have for a long time chosen mainly artists as friends. It only makes sense that most of my friends now are poets or writers – the poetry group, the Stockton crew who are mostly literature kids. In the past five years, I’ve given up the friends who were musicians, as they were mostly not my friends, but Todd’s. And this is ok – I don’t regret it, and I don’t think it was a bad decision. But I do miss the music, and I miss watching the way musicians communicate with each other while they play. I have always been fascinated by the eye contact, the simple facial communication without words.

I wish I could play something. Maybe that would help fill the silence that even the television, the stereo, Jacob’s voice can’t overcome. Poetry is all about noise and silence; the silence can be so effective between words, but after hearing the music in that house in Sacramento, I sort of wonder if maybe poetry wouldn’t benefit from a little direction between the words. But I don’t think making music is a reality for me, not anymore: I haven’t really played a piano since I was 15, and I don’t have the room (or the money) for one. The guitar hurts my wrists – I have never been able to figure out how to get my hand around the neck without pain. I don’t understand how to build a song, how to attach the notes to each other in a pleasing fashion.

Dave did give me an introductory drum lesson, though: a very simple, break-it-down-to-basics explanation of how to approach a drumset and not be intimidated. I have never before felt like I could possibly learn to play the drums. But I managed a very simple rhythm, and the encouragement on Dave’s face was inspiring. He is a very, very good teacher.

I have been feeling for awhile like I need to find another type of creative outlet. Poetry is cerebral; it requires lots of analysis and introspection. It is – or at least, it can be – exhausting. I thought for awhile about jewelry making, and though I some of the materials, I’ve been a little worried about starting. I’m feeling stagnant, overwhelmed, perhaps not talented. I think it’s a side effect of stress.

Maybe I just need to go for another hike.