yes. the pay is certain.

I suppose since I started writing at the age of 12 (and “seriously” at around 20), I have searched for a way to explain writing and its impact on me. Succinct summation is difficult to come by, and I’ve tried on many quotes over the years that seemed to fit for some time. Some (probably not) exact quotes:

When I’m writing, I know I am doing the thing I was born to do. (Anne Sexton)
Ask yourself in the stillest hour of the night: must I write? (Rainer Maria Rilke – the quote goes on to say if the answer is anything other than “Yes,” one really isn’t meant to write)
All the world for poetry is grist. (Adele Bourne)
If I read a book and it makes my whole body so cold no fire can ever warm me, I know that is poetry. If I feel physically as if the top of my head were taken off, I know that is poetry.(Emily Dickinson)

Though these quotes all seemed right for awhile, defining different philosophies I’ve had about writing or helping shape the feelings I have about it, none of them have so clearly and correctly captured all of my mixed emotions and thoughts about writing in one place as has a very simple, very short poem by Walt Whitman:

Sometimes With One I Love
Sometimes with one I love, I fill myself with rage, for fear I effuse unreturn’d love;
But now I think there is no unreturn’d love–the pay is certain, one way or another;
(I loved a certain person ardently, and my love was not return’d;
Yet out of that, I have written these songs.)

The pleasure of this poem for me is in the last line: “Yet out of that, I have written these songs.” The first three lines, to my mind, could be about anything, including their actual subject: unrequited love, frustration with job or friends or family, unfulfilled hope. Or, the opposite: fulfilled hope, endlessly satisfying relationships of love and friendship, contentment with all things. And still, out of all these things, we can write. No matter the situation, the consequence, the reward, we can still find something amazing in it. Even when we feel we’ve lost, we’ve won – because there is still beauty in losing and writing about it.

When I was 18, and then again at 19, I did something foolish: I tattooed my arms. It’s not really the action that I find foolish, but rather the content: a moon-and-star combo on the left upper arm, and a cartoony-looking butterfly on the right upper arm. I’m now 29, and I’ve been tired of the tattoos for awhile. They’re not hugely representative of who I am, and neither design is something I would actively choose at this point. They were stock tattoos, found on the wall amid thousands of other designs in the parlor I visited.

In Sacramento this summer, Dave left the house one night while I was there, quietly saying he had an appointment. He returned a few hours later looking amped. He showed us his new tattoo: 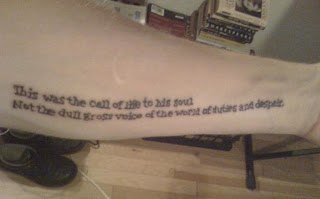 Two lines of James Joyce, carefully and beautifully following the line of his inner arm.

We had a conversation about choosing tattoos, and though he was careful not to judge too harshly, he made it clear that his philosophy in choosing to decorate one’s body with any permanence is to choose a piece that is self-representative, and meaningful. At this point, I couldn’t agree more.

I’ve considered for awhile having the tattoos I do have removed. I’ve done a small amount of research on the different options (creams that don’t really work, laser removal that is very expensive and more painful than the original tattooing), and decided against them. Instead, I’ve decided to have the tattoos covered with designs that are more meaningful and more self-representative. I came to that conclusion about a year ago, and only recently have started working on sketches. I have an appointment with a tattoo artist to go over some sketches – and after I do, I’ll probably wait a few months before committing to the design (and the price involved), since I don’t want to make a similar mistake this time.

A very rough sketch of the first design I’m considering: 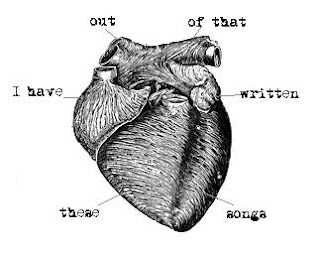 I don’t know yet if I’ll actually commit to undertaking a new tattoo. It scares me and excites me at the same time. The pain is tolerable; it’s the permanence that makes me uncertain. There are, of course, several factors I’ll be considering (sizing, price, placement, etc.) which will help with the decision.

It’s a lot of thinking to be done.