While in Sacramento this summer, my brother took me to Old Ironsides, a dark little pub at 10th & S Streets where there the music is good, the crowd is eclectic, and the beer is cheap and delicious. Apparently Old I is A Place To Be when you’re a musician in Sacramento, and their open mic nights are entertaining (if they occasionally make your ears bleed). On the night in question, however, there was no open mic night. There were three bands on the schedule for the evening, the first of which was Be Brave Bold Robot. 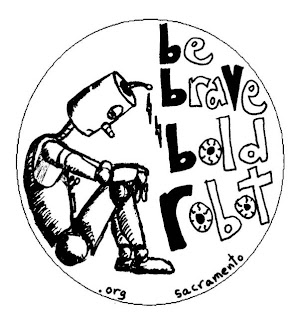 After listening to BBBR’s half hour (or so) set, my brother kindly introduced me to the singer, Dean. We chatted for a few moments over a beer, and I discovered that he is a Charles Simic fan. I nearly fainted from surprise – finding another fan of the former Poet Laureate in the middle of a bar in a town I don’t live in was a prize, as most people I talk to during the course of a day can’t name a Poet Laureate (or even define the post).

After hearing that I’m a writer with a small book, Dean offered a trade: my book for a cornucopia of his BBBR merch. Well, who wouldn’t take that deal? So I left Sacramento with a bright yellow, robot-emblazoned beer cozy 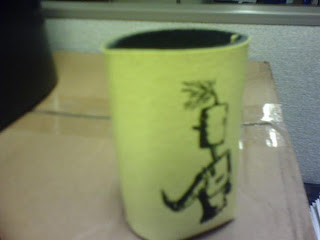 two ‘zines of better-than-expected quality, and a CD that I have absolutely fallen in love with.

I haven’t written anything new in about 4 months. Maybe longer – I’ve lost track. It’s a little frustrating. Anyway, on Saturday night I couldn’t sleep, so 2 a.m. found me sitting at the dining room table surrounded by a bible, some old study-and-devotional books, and a notebook, listening to BBBR and researching King Ahab for another poem or two in the biblical series.

Though I didn’t get much worthwhile writing out of the session, Dean’s music seems to have removed the ginormous creative roadblock that my psyche erected sometime in the late spring. I have ideas upon ideas crowding through my head, and my fingers are itching to do it again tonight.

Be Brave Bold Robot is not your average pub-in-the-city band. They’re not a meathead cover band trying to slip original music into the set list. They’re not the super conceptual local band whose members take themselves way to seriously. They’re not frat boys with guitars out to get laid. At least, I don’t think so. Rather, Dean is smart, and his lyrics show it. He’s funny, and willing to sing about his grandmother while playing intricate guitar melodies. There are some other crazy instrumental happenings (I’m pretty sure I heard a banjo, maybe a xylophone?), and whoever that girl is who sings the backing vocals is an angel.

I’m pretty sure that if the Barenaked Ladies had a lovechild with Death Cab for Cutie, and the surrogate mother was Lisa Hannigan (of Damien Rice’s “Volcano), you would end up with Be Brave Bold Robot.

Anyway, you should visit their MySpace. Catch a show if you can. Buy stuff on iTunes (I checked – they’re there). You should get the song “Keep the Women Happy.” And then come back and thank me.