This week’s episode of America’s Next Top Model started with technical difficulties: my friend Lynn was over for dinner, after which we went out for a quick drink at the local watering hole. Because of this, I had to tape ANTM and in setting up the tape, managed to eliminate the volume for the first two minutes or so of the episode. I don’t think it’s that big a deal: mostly it was Nikeysha talking. Again. Oh, except there was a brief bit of Marjorie. Too bad, ‘cause she’s adorable.

Ok, the sound comes back in just in time to hear Nikeysha say, “Next time, I’m gonna shut up.” Riiiiiiight.

Isis gets on screen in the first three minutes of the episode this week, talking about how she had the second best photo last week. Yay!

The girls head over to some warehouse space to do a posing workshop with everyone’s favorite flexible ninja, Benny Ninja. Benny and his Australian contortionist-slash-model sidekick Bree show the girls how to pose in red mesh fabric tubes. It’s weird. Benny is a bit hard on Isis – he reminds her repeatedly to “watch your face,” which is a difficult thing to do without a mirror. Oh, haha, I crack myself up.

Oh, yay! After the posing workshop, it’s time for lots of girls in the hot tub. What do they do? Surprise: they play Truth or Dare. Sheena gets dared to dance for them – despite stating that she doesn’t consider herself a hooch, she busted out the hooch dance. Sweet.

Transphobe Clark gets dared to make out with “So-Not-Into-Labels-My-Sexuality-Is-Fluid” Elina. Clark has a huge grin on her face. Elina says, “I saw fireworks.” Ugh. Someone jokes that “Clark’s going home a lesbian” – sigh. Yeah, kissing one girl for about three seconds with no tongue totally makes you a lesbian. Anyway, Clark’s phobia apparently doesn’t extend to pretty brunettes named Elina.

However, the phobia has migrated to Hannah, who is pulling on her earlobe uncomfortably and wondering why all these girls are so wild and crazy. Hannah, who is from a small town in Alaska (is any town in Alaska not a small town?), follows up her earlobe-pulling-ponderance with the confessional booth statement: “I generally wouldn’t hang out with characters like Elina or Sheena…or Isis, because she’s a transgender.”

Whoa. Ok, let’s get all lesbian and process that shit:
“I generally wouldn’t hang out with characters like Elina or Sheena…or Isis, because she’s a transgender.”

Now, perhaps it’s just the magic of editing. Perhaps Hannah actually said something like, “I generally wouldn’t hang out with characters like Elina or Sheena in my small town in Alaska, because most people aren’t sexually fluid or beautiful Asian women from Brooklyn. And I generally wouldn’t meet anyone like Isis, because she’s a transgender, and I don’t know any transpeople in Alaska.”

But somehow I doubt that.

Did she really just say she wouldn’t hang out with Isis because she’s trans? And not just trans, but “a transgender”? That’s like saying, “a black.” Somehow the indefinite article paired with the adjective-turned-noun makes it seem – oh, I don’t know, like something icky.

Cut from the booth back to the hot tub, and we see Isis in the center of the hot tub, surrounded by the rest of the girls. She is slowly backing up across the hot tub, and moves a little too close for Hannah’s comfort. Hannah shoves her from behind, just to let her know that personal space is not to be invaded. Everyone else notices, and sort of calls her attention to it awkwardly. Isis, again to her credit, just rolls her eyes and mostly lets it roll off her back. Hannah jumps out of the hot tub and makes an exit.

This must be a bad day for her – the next cut is to Hannah sitting on some of the beds with Sheena and Brittany, discussing her behavior in the hot tub. Hannah attempts to defend herself by digging a hole that she can’t get herself out of: “I’m a stereotypical white girl,” she tells Sheena (who is Asian) and Brittany (who is black). “I don’t really like rap music, I’m not really loud, I’m not gonna walk in a room and say, ‘Ha-ay!’” Sheena and Brittany try to explain why using those stereotypes as a way to defend herself is not ok, and Hannah starts to cry.

Ok, look folks: Sometimes, people say things that are racist, or sexist, or homophobic. Sometimes, they don’t realize that what they’re saying is offensive, because it doesn’t seem that way to them. And it seems true, after all: Don’t you know black girls who walk into the room and say, “Ha-ay!” But just because you might know one or two people who fit a certain stereotype, that doesn’t make it ok to generalize and apply that stereotype to all people who fit a certain description. Listen, I worked for a Jewish guy once. He embodied every negative stereotype that ever existed about Jews. He was gross. But I know better than to apply that stereotype to the other Jews I know.

I think that a lot of people believe that what they say isn’t racist because they’re not saying, “I hate (insert minority group here).” I think they don’t realize that attributing any validity to any racial stereotype is a form of racism. And I think this is probably the case with Hannah – she just doesn’t realize how what she’s saying affects other people. It’s pretty clear that she’s mostly been surrounded by straight white people who all talk this way.

But too late: she’s stuck her foot in her mouth and gagged on it. The vultures are circling.

Isis, meanwhile, is in the kitchen recruiting an injection buddy. She asks Analeigh to help distract her while she gives herself an injection of hormones, to aid her transition. Analeigh is a sweetheart – she keeps Isis company, impersonates a chicken, and recognizes the situation for what it is: a moment of extreme vulnerability. Isis mentions briefly that she feels nauseous – it’s kind of nice to see the producers including the day-to-day experience of Isis’ transition without making too much of it.

Then the girls meet up with Benny Ninja again to model some handbags or something. Meh. The challenge is not nearly as exciting as the drama at the house. Quick recap: everyone looks pretty much awkward except Lauren Brie and Elina. Nikeysha tells everyone she has to pee. The rest of the girls judge her. Sheena takes Hooch to a whole new level by planting her bag in front of her No-No Spot. She calls it Feng Shui. Yikes.

This is not a great week for Isis – her face is apparently a problem again, as Benny is once again telling her she needs to watch it.

In theory, yes, I’d agree. However, Sheena and Brittany have already been part of a two-on-one discussion with Hannah about race and stereotypes and potentially racist comments. They’ve already seen that Hannah doesn’t handle these things well. So Sheena should know that creating a four-on-one situation, in which Hannah again is the one, is not going to go well.

And, as Donna just pointed out to me – these girls are just as immature as Hannah, in a different way. Perhaps they’re not tossing out unintentionally-racist comments, but they’re stirring the pot to boil up some more drama. Consider that Isis, who is a likely target of discrimination on a regular basis, doesn’t feel the need to sit Hannah down and confront her about the shove in the pool. Her attitude is more along the lines of, “I don’t have time for this crap. I have hormones to inject, poses to work on, fierceness to convey.”

But the girls head to Hannah’s room for A Discussion. Nikeysha tries to start it off fairly: “I wasn’t there but I know you had a discussion with Brittany and Sheena.” Joslyn just jumps right in, though, deciding to cut the shit and get to the point: “Are you prejudiced?” Hannah looks visibly shaken – it’s clear she feels attacked, and who wouldn’t? Whether what you said was racist/phobic/crazy or not, no one likes to be put on the defense like that.

Her response: “I’m sorry you feel that I’m racist and prejudiced, but now it’s time for me to go to sleep.”

It’s probably a good thing for Hannah that she chooses to shut the confrontation down as quickly as possible. She states simply that she’s not a racist, and says she’s walking away from it. And then she does. Despite the immaturity of her statements, Hannah demonstrates class by refusing to engage in the “oh-so-3rd-gradeness” of the confrontation.

Too bad she ruins it the next day by accusing the girls of something akin to “gang rape or gang violence.” Yeah, ‘cause there’s nothing racist about calling the actions of several women of color “gang violence.” And, um, Hannah? Gang rape generally involves sexual assault by several people at once. As far as I can see, no one sexually assaulted you. Don’t do that again. It’s offensive. In multiple ways.

And then there’s the photo shoot. The girls are supposed to wear some big-ass heels and high-fashion dresses while hanging from a rope ladder attached to a balloon. Except the wind is too strong, and the crew can’t control the balloon, so they hang the rope from a crane instead. Ok, fine. Whatever. Lauren Brie takes a badass picture: 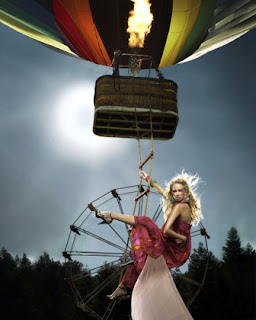 And Isis takes a picture that is mediocre: 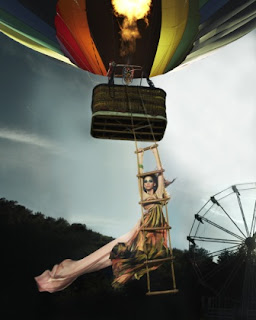 Apparently she thinks too much when she’s posing, and it’s not a good week for her for that. I do notice during the photo shoot, however, that Isis has really striking eyes.

Nikeysha shows everyone her underwear during the shoot. Awkward.

Finally we go to elimination. There’s lots of talk, blah blah blah. Tyra tells Isis she looks like she’s in elementary school, with her little cuffed shorts and her weird shirt. It’s true, she sort of does.

Sheena gets called out on having fake breasts. She initially denies it, but before the judging panel adjourns to – well, judge – she cops to having had implants.

Nikeysha gets called out on being so thin. Tyra asks about her eating habits, and Nikeysha avoids the question by saying, “You think I’m too too thin?” Miss J dismisses the subject with a joke: “Eat a cheeseburger with fried chicken and a watermelon chaser,” and everyone laughs and moves on. So much for constructive dialogue about body image and eating disorders.

Clark gets called out on wearing too much bronzer. Yeesh.

Lauren Brie, no surprise, gets first call. Nikeysha and Isis end up in the bottom two. Whew – Isis makes it through, and Nikeysha gets sent home. Talking. And talking some more. She actually talked through Isis trying to receive her photo, until Tyra told her to hush.

Not too much focus on Isis this week. That’s kind of good, I think – they’re letting her be part of the competition without making too much of her transition. And the girls mostly seem to have let the subject settle. I suppose it really only takes a few days of living with a transperson to realize she’s no different than anyone else. Which may mean I’m out of things to blog about. Hm. We’ll see.

Next week (which is actually, like, on Wednesday): I don’t know, actually. I didn’t watch the preview.

Shoutout of the Week: Analeigh gets much love this week for taking on the needle with Isis.

Karmabump: Sheena doesn’t get eliminated after coming clean about her breasts. Finally, no punishment for honesty.