I went camping this weekend, and was going to blog it, but this shit just took top priority:

A Republican women’s group based out of San Bernadino County, CA, circulated a newsletter in October claiming that if Obama is elected this November, his face won’t appear on US currency, the way other Presidents have. Instead, Obama would appear on food stamps – and the organization included in the newsletter a picture of something they’re calling “Obama Bucks”:

Are you freaking kidding me?

The Chaffey Community Republican Women, Federated organization is responsible for this horribly and disgustingly racist piece of propaganda. The newsletter was distributed to about 200 members and associates of the organization, including some African-American members.

Diane Fedele, president of the organization, claims not to understand the connection:

The group’s president, Diane Fedele, said she plans to send an apology letter to her members and to apologize at the club’s meeting next week. She said she simply wanted to deride a comment Obama made over the summer about how as an African-American he “doesn’t look like all those other presidents on the dollar bills.”

“It was strictly an attempt to point out the outrageousness of his statement. I really don’t want to go into it any further,” Fedele said in a telephone interview Tuesday. “I absolutely apologize to anyone who was offended. That clearly wasn’t my attempt.”

Fedele said she got the illustration in a number of chain e-mails and decided to reprint it for her members in the Trumpeter newsletter because she was offended that Obama would draw attention to his own race. She declined to say who sent her the e-mails with the illustration.

She said she doesn’t think in racist terms, pointing out she once supported Republican Alan Keyes, an African-American who previously ran for president.

“I didn’t see it the way that it’s being taken. I never connected,” she said. “It was just food to me. It didn’t mean anything else.”

She said she also wasn’t trying to make a statement linking Obama and food stamps, although her introductory text to the illustration connects the two: “Obama talks about all those presidents that got their names on bills. If elected, what bill would he be on????? Food Stamps, what else!”(from PE.com)

One of the things that really gets me is when people try to show how not bigoted they are. Here, Fedele uses her previous support of Alan Keyes to show how not racist she is – except, you know, not-racist fail because this graphic, coupled with her statement (“What bill would he be on????? Food Stamps, what else!”), make for a seriously convincing display of racism.

I’m also not sure I follow her logic in wanting to point out the “outrageousness” of Obama’s statement that she intended to deride. Obama certainly doesn’t look like the other men featured on our national currency. Let’s take a quick peek, shall we? 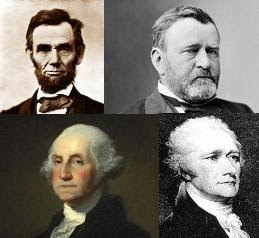 And, in case you have somehow managed to forget what Obama looks like despite finding him on nearly every channel on television:

Right, so can someone explain to me why it would be “outrageous” for Obama to make the point that he doesn’t look like these folks? Why it’s inappropriate and even “offensive” for him to point out that he’s black? After all, didn’t Fedele point out that she previously supported a black candidate? Why isn’t it inappropriate for her to point out Alan Keyes’ race?

Despite the ridiculously offensive nature of this newsletter situation, I think it opens up an opportunity for a hugely important dialogue. We are being given ample opportunity to discuss race relations in this country right now – the plethora of anti-Obama ads that are floating to the surface are creating a great space for frank discussion about how race is viewed and talked about (or not talked about) in our current culture. I have said several times in recent memory to my best friend that I believe sexism is far more acceptable and prevalent in our society than racism – and now these racist attacks on Obama are giving me cause to rethink that stance. I’m beginning to understand that I can’t take for granted the ground that was gained in the Civil Rights Movement of the 60s, because there are still people who want to take away the victories achieved.

If you’re as offended as I am, take a moment to explain to Diane Fedele why this graphic is racist, and completely unacceptable:

And learn from this, like I am: we have still so far to go.