Yesterday I bought a new album on iTunes. It’s rare – I generally don’t buy whole albums anymore, with the advent of this pay-as-you-go styled music delivery. In the past few months, I’ve only bought three entire albums – Radiohead’s In Rainbows was the first, followed by De Luxe’s Mary’s Got Seven But I’ve Got Ten.

Anyway, yesterday’s album choice was Stand Up, the label debut from God-des and She. Allow me to introduce you: 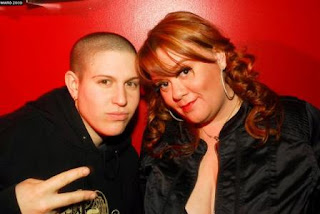 God-des and She are a Brooklyn-based hip hop duo; God-des (on the left) raps and She (on the right) has this incredibly soulful voice that compliments the rhythms really well. Since I bought the album, I have been listening pretty much nonstop, and I love it. This is something of a suprise for me, since I have never been a huge fan of hip hop. I’ve liked the occasional song, but I’ve always been much better versed in alternative indie rock bands.

But these two women are incredible. The album shows an incredible amount of variety – the songs range from soul to straight up hip hop to R&B with a little funk. The duo takes their cues from the quirky timing of Missy Elliott and the vocal stylings of Da Brat and Eminem, and doesn’t forget a throwback to Queen Latifah’s “U.N.I.T.Y.” in the production of this album. The result is a spread of 15 songs, covering every topic imaginable: sex, politics, relationship woes and pleasures, identity and conformity.

Key tracks:
“Love You Better,” the first single from the album which showcases the smoothest of God-des’ rapping skills and the amazing control that She exerts over her powerful voice.
“Hollywood,” a funny, Eminem-sounding jab at the celebrity world, including name-checks for 50 Cent, Fred Durst, Jessica Simpson, Queen Latifah and Dr. Phil.
“Lick It,” a must-hear primer for anyone who ever intends to get in a girl’s pants. Especially you boys.