Chad Michael Morrisette and his partner (who apparently only gets a first name, Mito) have created a Halloween display featuring Sarah Palin in a noose: 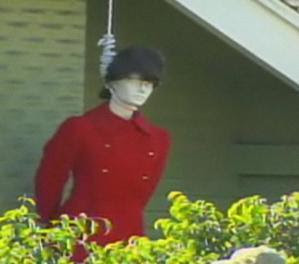 Sigh.
It wasn’t funny when some conservative college kids did it to Obama. It’s not funny when you do it to Palin.

The couple in question seem to understand that creating an Obama figure in a similar pose would be offensive and potentially dangerous, because of “our country’s history.” But I would really think that as a members of a group that has been targeted by violence on many, many occasions throughout history, these two guys would have put a little more thought into it. Mocking the $150k wardrobe scandal, pointing out Palin’s neo-McCarthyist-witchhunt perspectives, or her neanderthal views on women’s rights: all funny. All clever.

Depicting Palin as the victim of a vile, violent crime? Not funny. It’s relying on primal emotions to evoke a reaction from an audience. And again, I would think these guys would have put a little thought into the situation: the primal emotion that causes violence is, generally, fear. Transpanic, homophobia, racism, sexism: all fancy words for “fear.” So basically, they’re advertising their own insecurity, and attempting to dress it up in humor.

Except I don’t understand why violence is suddenly a huge joke.