I’ve been a little obsessed lately with the election, in case you hadn’t noticed.

It’s not just because I’m planning a kick-ass election party, but because I feel like there’s a lot at stake here. I’ve spent a good bit of time over the past few weeks either on the verge of or actually in tears, born of both fear and hope. I’m carefully optimistic about the potential for an Obama win this election, and as Donna said to me last night, “It just feels like the timing is right, doesn’t it?”

But at the same time, I’m afraid. I’ve been reading the news and the blogs, listening to the pundits and the pollsters. I’m appalled at the things I hear, honestly: the amount of overt racism that’s surfaced during this election season has me sick to my stomach. On Craigslist (not the home of the most intellectual posters, I’m aware) and in the comments sections of blogs and newspapers, the “n” word gets tossed around like nothing. People make comments about assassination as if it weren’t a crime [trigger warning], but rather a funny story. Obama-cutout lynchings and Halloween displays featuring Death stalking him are all over the place. Postcards like this appear on PostSecret (the text says “It’s only a matter of time”): 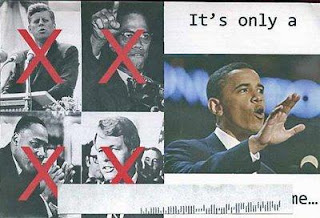 and no one can be sure if it’s expressing a threat or a worry. Assassination plots are already being uncovered, and there are still a large number of uneducated Americans who believe that Obama is actually a Muslim terrorist, trying to ruin America from the inside out.

I look at all of these things happening, and I just think: My God, do we really live here? Is this it, is this the culture I am a part of? I’m disgusted, disappointed, and I’m feeling helpless. In a lot of ways, this doesn’t apply to me: I’m a white female, living in a middle-class town that, despite the economic crisis, is faring pretty well. People are still buying Hummers and maintaining their ridiculously large homes. My neighborhood is quiet, and luckily for me, pretty damn liberal.

But at the same time, it does apply to me. Because every instance of the racism that Obama faces in his candidacy is a reminder to me that someone feels that way about me, because I love another woman.

I don’t even have to venture too far from home to find the person who feels that way: in late 2005, I picked up a copy of Time Magazine’s Oct 10 issue, the cover of which featured a story on gay teens in America. Someone I once considered family saw the magazine and told me, “I think all gay people should be lined up and shot, because they’re all going to Hell anyway.” Neither of us had any way of knowing that I’d begin to identify as “queer” in the next two years, but I was horrified by his statement nonetheless.

I sincerely doubt that this person would ever plot an attempt to end my life because of it. He seems fairly content to avoid acknowledging my presence when we do, on the very rare occasion, end up in the same room together. And that’s just fine with me. But there are people out there who are losing their lives for doing pretty much what I’m doing: living with a woman I love, raising a son, creating a family where some people feel there shouldn’t be one. And it’s a damn scary thing.

So thank goodness for Rachel Maddow. An Air America personality who recently snagged her own show on MSNBC (following Keith Olbermann), Maddow is smart (Rhodes Scholar!), funny, and not too shabby to look at, either: 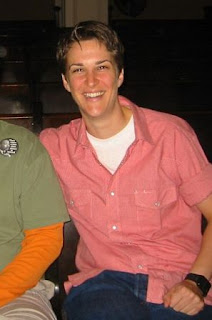 Her 60-minute show, which is essentially a commentary-driven themed recap of the day’s political and current events, is a calming influence for me. At the end of the day, I know that no matter what happens, I can turn to Rachel Maddow to put it into perspective for me – usually by making me laugh.

And that’s exactly what she did last night. In a segment called “One More Thing,” Maddow pointed out that an LA Times / Bloomberg exit poll of early voters in Florida and Ohio returned the following results: 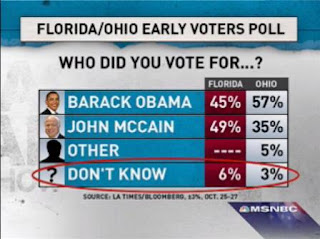 But I think, actually, my favorite interpretation of these results was found in a forum online: “The six percent are stoners.”