I turned 30 in July, and for my birthday, my friend Don gave me a gift card to Barnes and Noble.  It’s a fairly common occurrence: people who don’t know me that well tend to get me gift cards to book stores, as they know I like to read. People who do know me well (like Don) get me gift cards to bookstores because I have so many books, they can’t keep track of what I own and what I don’t. Understandably.

I have long detested big-box bookstores like Borders and Barnes and Noble, ever since the QNDs started hosting readings at a local bookstore in Mt. Holly (sadly, the Book Shelf closed down and the owner moved away). I can usually find what I need in smaller, independent bookstores – and if I can’t find it, the owners can usually special order it for me. Of course B&N and Borders can do this too, but they’re so impersonal, and I just get a general feeling of ick. And it really annoys me that they have so many books on the shelves, and pretty much none of them are the books I want.

Anyway, Donna and I took a trip to Barnes and Noble on Saturday to spend the gift card. I had two things in mind: the first was Marie Howe’s latest collection, The Kingdom of Ordinary Time, which came out last year, and book called Feminist Mothering by Andrea O’Reilly that I’d read about on Feministe. Now, I knew I’d seen Howe’s book there before, and I was optimistically hoping that O’Reilly’s book would be there.

I headed first to the Women’s Studies section, as it was closer to the door. Or I thought it was. I looked and looked, but I couldn’t find it in the place I remembered. Cultural Studies, Gay and Lesbian, African American – but no Women’s. Hm.

I then decided to look back in the poetry section for Howe’s collection, and to keep my eyes out for one of those computer stations where you can search the store inventory. No dice on the computer station, though I was relieved to see the poetry section hadn’t disappeared. Shrunk, yes, but not disappeared. I searched for Howe’s book – again, no dice. Of course, it took me some time to search, as the entire section was completely out of order, and there was some Max Lucado shoved in for good measure. I debated buying another volume of poetry, and decided against it – I am tired of being guilted into buying only that which appears on the shelves of the big-box stores, when there are really exciting poets I want to read, like Patrick Rosal and Joan Larkin, who don’t appear there.

I wandered over to the magazine section, only to discover that the only poetry journal B&N carries is Poetry. I pulled out a copy and read three relatively disappointing poems by Tony Hoagland (perhaps it was just my bad mood at this point), and decided against it. I found Donna browsing the Anime/Manga section, and after a brief discussion, I tried out the media area of the store, looking for John Hughes movies for the Hughes-A-Thon. Not one thing, I swear. I couldn’t find Sixteen Candles, Pretty in Pink, Some Kind of Wonderful, Uncle Buck, Ferris Bueller – nothing. Again, maybe this is because everything was so jacked up – the categorizations made no sense, and while the signs indicated that the arrangement was “alphabetical by genre,” I saw no semblance of any alphabet that I could recognize. What a mess.

I gave up on the movie idea, and headed off to find Donna again. She was browsing the Gay & Lesbian section when she called my name – turns out, Gay & Lesbian, which gets this huge freaking sign:

which, when you see it against the shelves, is actually this big:

After being grumpy about the lack of signage, and the fact that within Women’s Studies was a book by Jimmy Carter on Palestine, I realized they didn’t actually have the book I was looking for. I was so irritable at this point that I was ready to just throw the gift card in the air and let someone else have it, but I decided instead that I would buy the Homer and Aristotle bookends on display.

That was kind of worth it, actually. They’re hilarious. 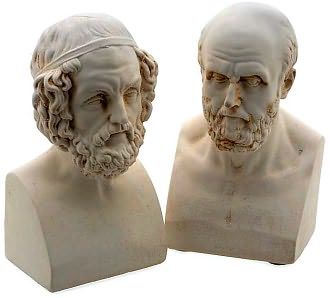